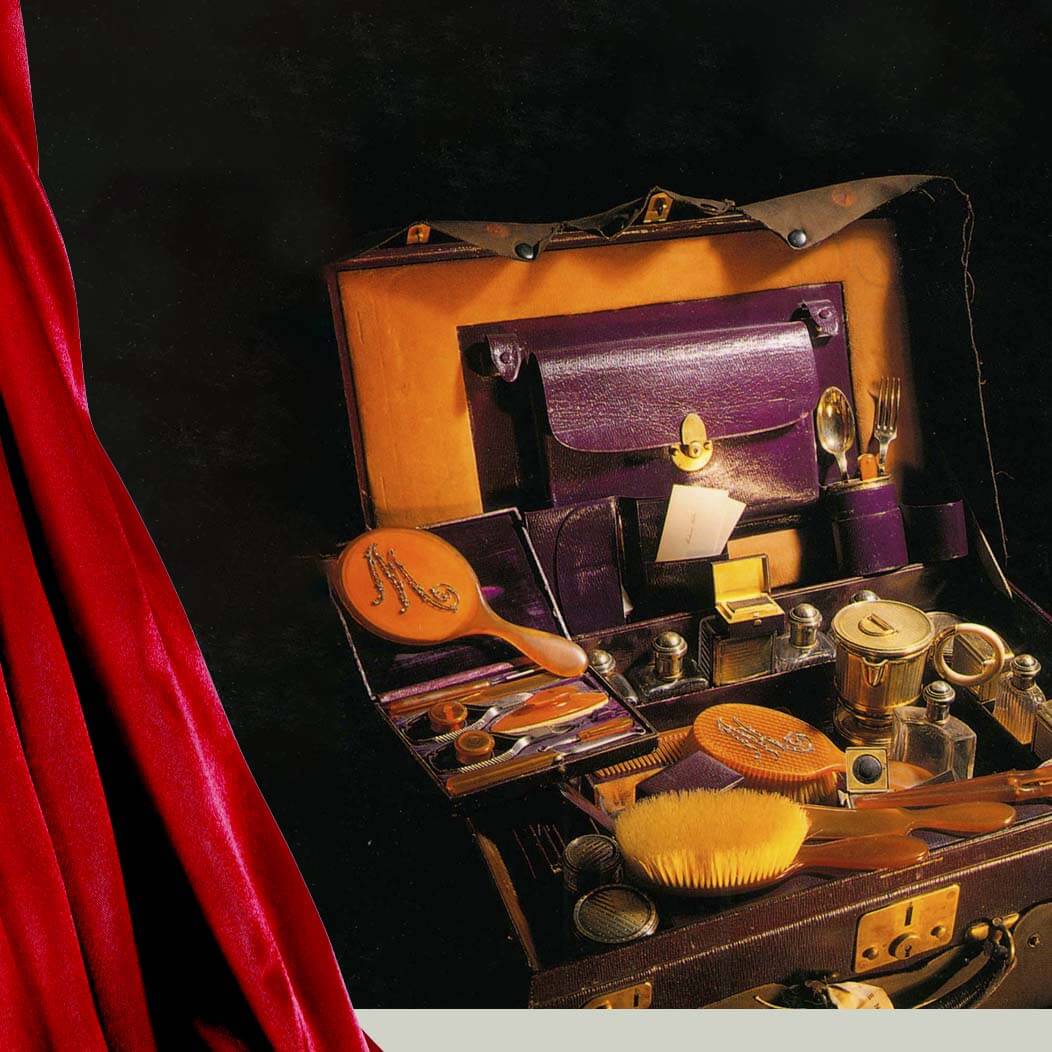 After returning to Melbourne to live permanently with George at Doonside, Nellie started her singing career. Following are the performances we have found.

Nellie sang ‘Regnava nel silenzio’ from Lucia at a soiree at Allan’s to advertise a new piano. (1)

Nellie at the Athenaeum Hall, Collins Street, Melbourne in a benefit concert for 13-year-old Ernest Hutcheson. Nellie sang an extract from Mireille (Gounod) and a duet with Armes Beaumont. (1)
A pupil of Max Vogrich, Hutcheson has a distinguished career as a pianist in America and became president of the Julliard School in 1937. (1)

Nellie sang ‘I heard a voice’ and ‘The pilgrim’ at the Metropolitan Liedertafels’ farewell to Julius Buddee. (1)

Nellie performed at a concert at Sorrento to raise money for a fence around the cemetery. Sorrento was a favourite summer holiday place for the Mitchell family. While there is conflict over who organised the concert – Nellie or George Coppin – she sang ‘The angel at the window’ (Tours) and ‘Sing sweet bird’ (Ganz). The concert raised £20 for the cemetery. (Radic pg.19, Hetherington pg. 43, Murphy pg.11). 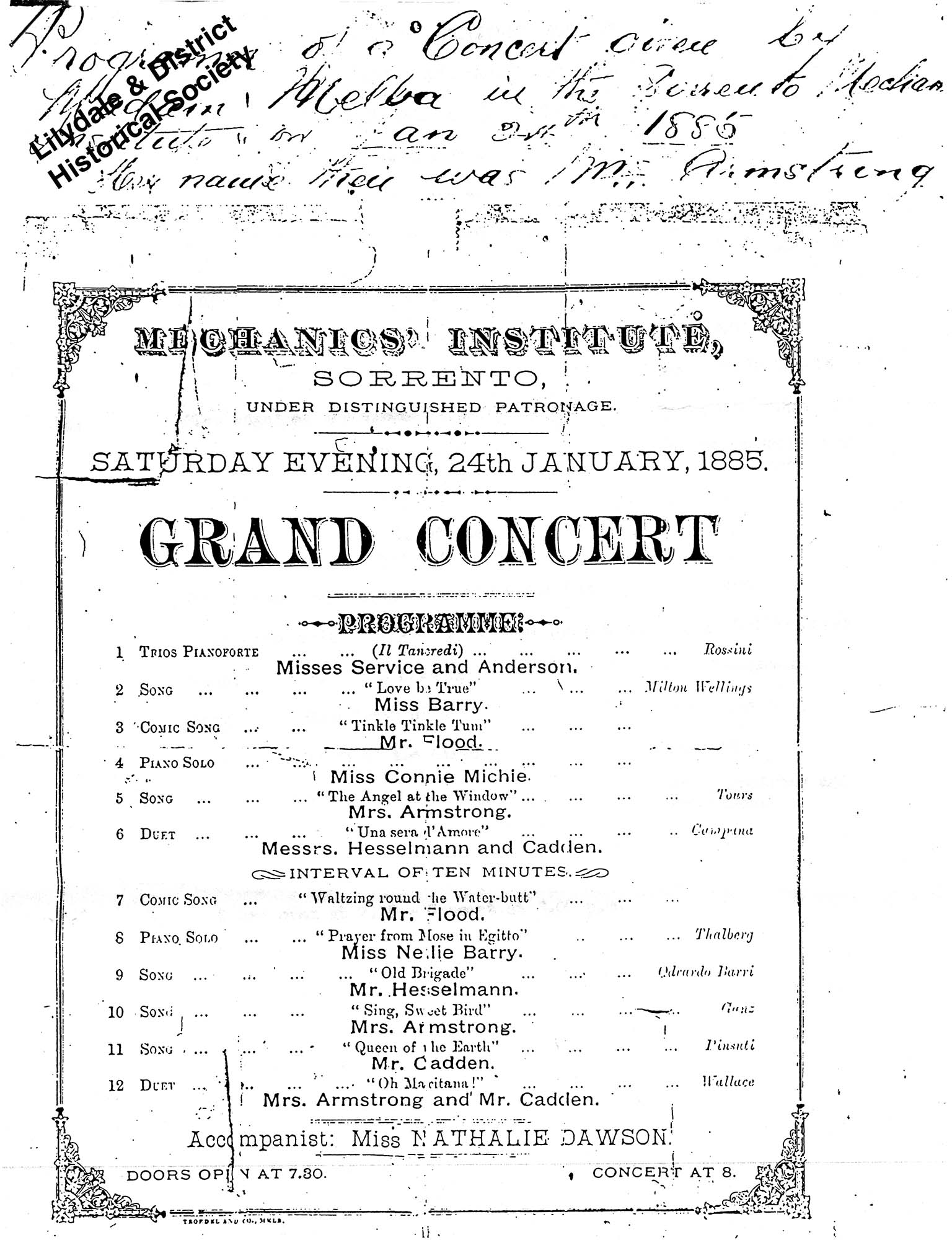 At a Melbourne Liedertafel’s production of Brahms’ Rinaldo Nellie sang ‘The shadow song’ from Dinorah (Meyerbeer) and ‘When the heart is young’™ by Dudley Buck. (1)

Note: One of the principal features of the programme, however, was the singing of Mrs Armstrong, a lady who has been singing at the metropolitan concerts. Mrs Armstrong has a pleasing penetrating soprano voice, and albeit Mr Robson asked the indulgence of the audience owing to her voice being slightly affected by a cold, her first number, the grand scena “Ombra Leggiera” established her at once as a favourite. (Ballarat Star April 18, 1885) (4)

Ballarat Liedertafel Concert in the Alfred Hall. Mrs Armstrong ‘Regnava nel silenzio’ from Lucia di Lammermoor (Donizetti); encores ‘Because of thee’ and ‘I dreamt I dwelt in marble halls’ (Balfe). Trio of ‘Through the world’ with Messrs Woolcock and Vercoe. Other performers: Miss Bessie Jukes, Mr A. Slack, Mr R. L. Nicholl, Mr V. Woolcock, Mr R. J. Dunn, Mr J. T. Vercoe, Mr A. Hollander and the Liedertafel chorus and orchestra of 26 instruments. Note: Mrs Armstrong last night received quite an ovation on each appearance. (Ballarat Star May 5,1885) No account in the Ballarat Courier. (4)

As the female soloist for the Metropolitan Liedertafel’s Kruse concert she sang ‘Lo, the orb of day’ (Schubert) with the Liedertafel choir; Recit. And cantata from Beatrice di Tena (Bellini) and the duet ‘Sulla tomba’ from Lucia di Lammermoor with Armes Beaumont. (1) Johann Kruse, an Australian violinist returned to Australia for a concert tour in June and July 1885 and returned to Europe on August 11, 1885.

Nellie sang a solo and duet with Armes Beaumont at the Metropolitan Liedertafel’s farewell to Ernest Hutcheson. (1)

Appeared with the Metropolitan Liedertafel at the Melbourne Town Hall. Nellie sang ‘The erl king’ (Schubert) with orchestral accompaniment; ‘Lo, the orb of day’ with orchestra; ‘qui la voce’ from I Puritani (Bellini) and a duet with Armes Beaumont ‘O that we two were Maying’ by Alice May Smith. (1)