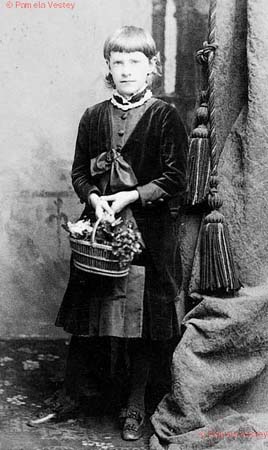 Dora was born May 20, 1873 and possessed considerable artistic talent.

She also spent time traveling the world with Melba.

She was delighted with the wealth of art to be found in London and Paris and Nellie enjoyed showing her sister all the sights. The trio spent most of the summer at the Thames-side house, which Nellie had rented.

In 1901 Dora again visited Melba in America and they travelled back to England together. (1)

Later, in 1906 she married Charles Algernon Lempriere who had a farm at Yea.
His grandfather Thomas James Lempriere was an artist in Tasmania. (2)
Dora and Charles’ daughter Helen was born on December 12, 1907.

When Melba arrived back in Australia in August 1911 for her opera season, she stayed with Dora at her home in Toorak. (3)

After the death of David Mitchell in 1916, part of the land he owned which had been cleared of timber was subdivided and sold off.

According to the Shire of Lilydale ratebooks the Cave Hill Estate No. 3 subdivision was put up for sale in 1927/28 and Dora purchased three parcels of land. At the time she was living at Greenmeadows, Yea. The land totalled about 17 acres and included a house.

By the 1929/30 year, Dora was living on the property and her address was given as Birmingham Rd Lilydale. This later became the present Hull Rd, Lilydale. Today, the property is owned by the Lilydale Adventist Academy.

In its brief history of the property, the school writes the land was part of the Beaulieu property. Using stone from Cave Hill, Dora renovated the house previously lived in by the property managers.

“Nellie heard of her sister’s project while touring in Italy and commissioned for Dora a large marble bath to be made from a block taken from the Carrara marble quarry, the same quarry as had been frequented by Michelangelo. It was duly installed with a special, heavy-duty slate floor to hold its weight.”

After Dora’s death the property was sold and eventually purchased by the Lilydale Adventist Academy in the 1960s. The academy established a boarding and day school.

Today, the rose garden, old stone walls, the bird bath, fish pond and trees are reminders of an era past. The bath was used as a cattle trough but it disappeared in the early 1990s.

Helen Lempriere inherited the talents of both sides of the family. She studied sculpture and painting in the 1930s and became a famous artist.

In 1950 Helen and her husband Keith Wood moved to Paris and stayed for eight years. Helen exhibited first in 1953 and held solo exhibitions in Paris, London, New York and The Hague between 1954 and 1962. Her work was also shown in Milan. Following the successful exhibitions, Helen worked in Europe in 1962-1966 and held an exhibition in the Leicester Gallery in London in 1965. (4)

Helen was more than a painter, she was also a print maker and her work included etchings, linocuts and lithographs (5)

Helen Lempriere was one of Australia’s leading female artists in the mid 20th Century, attracting national and international acclaim for her painting, printmaking and sculpture.

When they came home, Helen and Keith bought a house and studio in South Kensington but later moved to Sydney’s northern beaches. Helen died at Mona Vale on November 24, 1991.

Today, her paintings are in museums and galleries in Australia, Israel and the United States and also in private collections. (6)

Determined to honour Helen’s contribution to Australian art, Keith Wood left a bequest and the Helen Lempriere National Sculpture Award was established and launched in 2000.

The Award is the realisation of a bequest by the late Keith Wood, honouring his wife, Helen Lempriere.

The purpose of the scholarship is to enable a visual artist at the beginning of his/her career to undertake a one to two year program of study or training overseas. This may be through a recognised art institution or participation in short-term workshops or study with a nominated artist. (8)