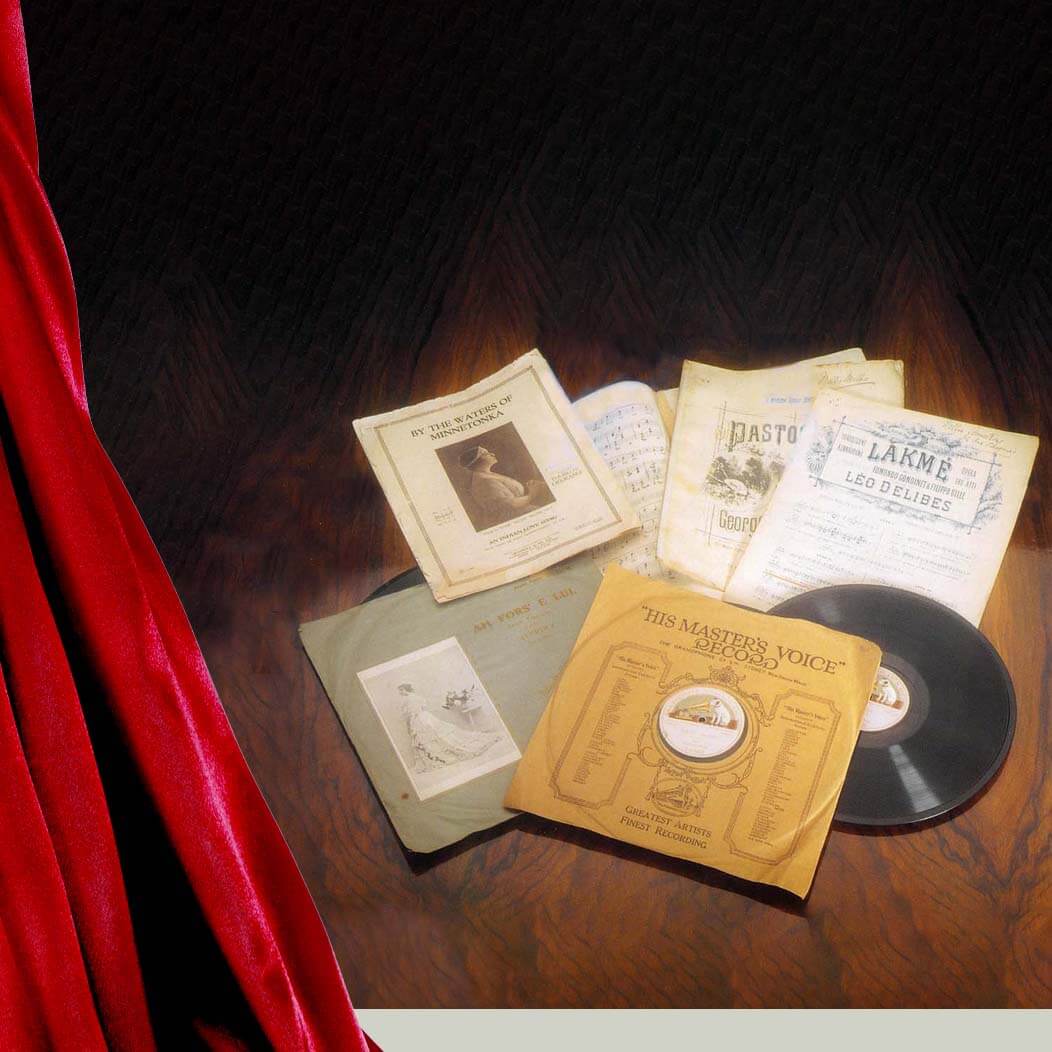 Melba was always fascinated by new inventions, very much like her father before her. The inventions of cylinder recordings and later disc recordings, although primitive by today’s standards, fascinated Melba.

After many requests she finally agreed to do some recordings but very much on her own terms. Unlike other artists who were paid for the session and no royalties on record sales, Melba insisted on both and helped improve the lot of all recording artists.

Melba’s first recordings were made in London in March 1904 and her description of being in the recording studio three years later in New York between March 24 and 30 1907, is worth including verbatim, for the record so to speak:

Let me … take you with me to … the making of gramophone records. It was now [1907] that I really began to take gramophones seriously. I say  ‘seriously’ because my first experiments in this direction were disastrous. They had come to me two years before in London, and after a great deal of persuasion, and a promise that, if I didn’t like the records, they should be destroyed, I consented to sing. And so they arrived one day in my house in Great Cumberland Place, with many mysterious-looking instruments, and after turning the house upside down, I sang.

“Never again,” I said to myself, as I listened to the scratching, screeching result. “Don’t tell me I sing like that, or I shall go away and live on a desert island, out of sheer pity for the unfortunate people who have to listen to me.” The records were therefore destroyed.

But the gramophone people (with whom the Victor Talking Company were now associated) persisted. Never have I known such courtesy combined with such persuasion. They simply would not leave me alone. They said that no great artist, with the exception of Tamagno, had ever sung for the gramophone, and that if I would only give them another chance, with their greatly improved apparatus, they were sure that I would be delighted.

I did, and I was. I have always been one for “having a shot at things,” and I am glad that I had a shot at this. I was no longer ashamed of my records. I was delighted with them. And I think you ought to know something of the manner in which they were made.

The headquarters of the Company were at Camden, on the other side of the river to New Jersey, and there on the first occasion, in a little room barred from all outside sounds, I went through one of the most trying ordeals of my career. You who sit back by your firesides listening in tranquillity to our songs and our arias, and imagining that they were sung without nervousness, without any of the tremors that a great audience inspires, have little idea that to sing to the gramophone is, in reality, one of the most nerve-racking ordeals.

Let us suppose that I am making a record with an obbligato of flute, and a piano accompaniment. I stand against the wall, in front of a hole which I know to be the thin end of a trumpet leading to the recording apparatus. This apparatus is in the adjoining room, so that all I can see of the work is glimpsed through the tiny hole. In my own room, a tube ending in a trumpet hangs over the piano.

A slight whirring noise comes from the other room, the pianist starts to play, the flute blows in my ear, and I begin to sing. There is no audience to cheer me on, only the sight of a little square window. But there is, in my mind’s eye, an audience far greater than that of any operatic hall, and I know that if I make the slightest mistake, the faintest error in breathing, there it will remain, mercilessly reproduced, to all eternity.

What makes the whole thing even worse is the unusual “technique” which it is necessary to observe in making every record. For example, one must lean right back, when taking a top note, or the record will jar. And at the end one must stand rigidly still and silent until the signal comes to “stand at ease” I shall never forget that once after making what I believe would have been the most beautiful record, I stumbled backwards over a chair, and said “Damn” in an all too audible voice. That “damn” when the record was played over, came out with a terrible clarity, making me feel much as a sinner must do on the Day of Judgment.

No, singing for the gramophone could not be described as a rest cure. One of the most curious features which the gramophone brought into my life was a succession of marriage proposals from people who had heard my records, but who had never even seen me. There was something almost uncanny in the idea of some man in the remote prairies sitting down in front of a little instrument, listening to the echo of my voice, feeling that he had found his ideal woman and writing to tell her so. (1)

The attached MP3 file of Comin’ thro the Rye was recorded at Camden New York between October 2 and 4, 1913. For the old Scottish ballad, Melba was accompanied by Prof Gabriel Lapierre.

The disc was released by The Gramophone Company, Middlesex England No. (03369, 88449). While much has been digitising Melba’s records this was recorded from an original disc on 78rpm record player to give the listening some idea of the sound those men of the prairie who proposed to Melba, heard.

The following list of all of Melba’s recordings is from Therese Radic’s book  Melba The Voice of Australia.
The list was compiled by William Hogarth. Reproduced from The Record Collector, March 1982 and updated by Ms Radic in 1986.

Layout is the usual – discography number, matrix number and title: underneath the single, then double face, numbers of the recording company, followed by those of the partner company-Gram. Co./Victor, or Victor/Gram. Co. as applicable. The IRCC/AGS numbers at the end of this line are of pressings from original masters.

Where ‘Unpublished’ appears instead of an original catalogue number this means the title was not released by the company in its normal pattern of trading. The masters were on file, however, and white label ‘special pressings’ were obtained of most of them when the company was still providing this service, as was done also for the reissues of the IRCC and American Gramophone Society. A blank in the sequence indicates a missing matrix.

Eventually everything available to the Gramophone Company was transferred to five long-play discs and issued as a boxed set RLS 719. All that is missing is the recently discovered 25 cm ‘Jean’ (No. 106) and another take of ‘Ave Maria’, presumably 1904. It could be discography No. 33, a test pressing of which exists in the USA. It is unusual in having no label at all, nor any of the expected inscriptions such as the usual ‘Melba’ or matrix number on the completely blank centre. RCA/Victor has transferred holdings to VRL5 0365 as a boxed set with notes by William R. Moran. No details are available of the Bettini cylinder issues Melba is known to have made before 1900, nor of the putative 1903 (‘for private purposes only’) series, all masters of which were destroyed at her request.

The 1904 series included a recording of Annie Laurie, according to the late Carl Russell, of Melbourne, derived from reliable information provided by the Mitchell family.

When single-sided issues were deleted in 1924 the subsequent doubled-sided issue on DB 346 proved to be No. 62, this time with the number 2-053029. The two versions can be distinguished one from the other by virtue of the presence or otherwise of the ‘Follie, follie’ sung just before the ‘Sempre libera’.

These four titles with piano accompaniment by Harold Craxton.

The following titles are from the Mapleson (Librarian of the opera house at the time) collection of cylinder recordings made during actual performances. Much recent research has been done on these and it may be that other Melba titles will emerge. Some of the tracks below, all including Melba, were issued on two long-play discs (with many other artists’ tracks from the same collection) by the International Record Collectors’ Club, USA, except No. 187 which originally appeared as a single-sided 78 r.p.m. shellac pressing, in 1938 as IRCC 5002. (Some time ago Dr John Stratton, Canada, concluded that this excerpt was by Suzanne Adams and not Melba, Ed).

The following unconfirmed titles are supposed to have been made:

If the reader is interested in an even more detailed discography I suggest William R. Moran’s lists and notes in Nellie Melba: A Contemporary Review (Greenwood Press, Westport, Connecticut, 1985).